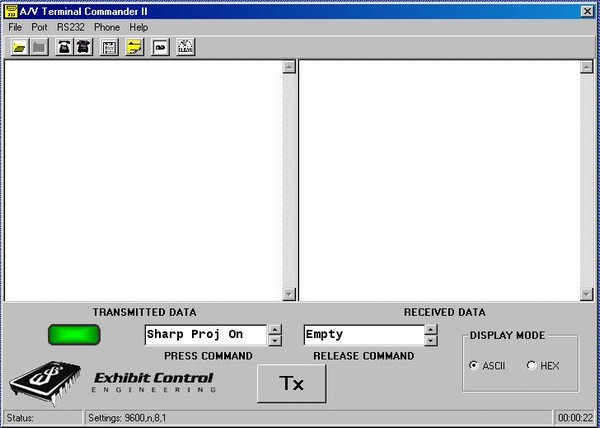 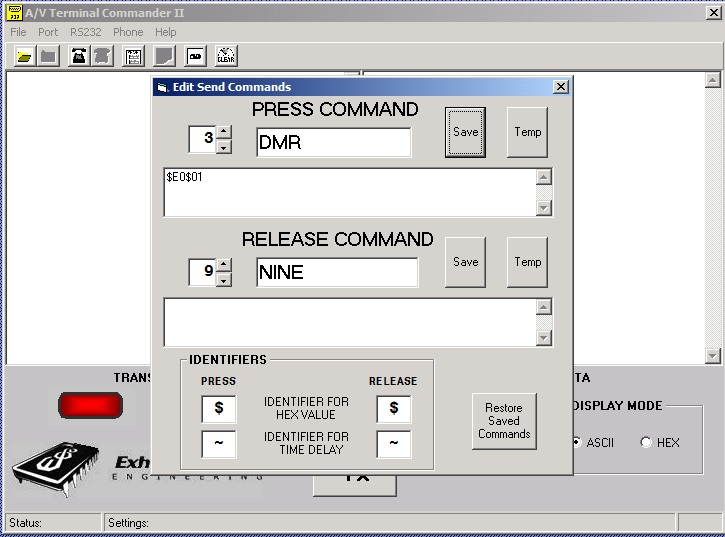 There is one known bug in the program.  If you try to save a transmit string in the Command Edit Window that has commas in the protocol, the commands will not save properly and will corrupt the data for all command slots.  A work around for this problem is to insert the hex code for a comma (0x2C) rather than type it into the string.  Also, I suggest under the RS232 drop down menu, click on the Turn Off Break/Frame Msg option.  Devices that exhibit this problem tend to cause numerous events of this nature and you will get a pop up for everyone and then you have to click each one off.

Although we cannot guarantee that this program will work with all USB to Serial Converters, we have not found one yet that it will not work with.  This program has been verified on the following operating systems:  XP (both Home and Professional versions), Win 2000, Win 98 and Win 95.  It has not been verified with Windows ME, and there has been at least one report of problems with that operating system.  So far we have not had any problems with it working with Vista, Win7 and Win8 – 32 or 64 bit systems.  Much to our surprise, we have one colleague who uses it on a MAC with a Windows operating system and USB to serial converter.  This program also works on Win10 and 11.  When using Win11 with a USB-RS232 Adapter, depending on the manufacturer and when it was manufactured, you may need to get an updated driver for the device.  The symptom for this situation is the program will run but the PC will not assign a port number.

If you download and load the program and get a file error when run the Terminal Cmdr program, look in the unzipped install file folder for a file named “transmit.dat”.  Copy that file and save the copy in the file folder with the executable file AVTermII.exe.  This should fix your problem.

Update 12-18-2009:  We recently found a bug in the Cmdr which is limited to when it receives a back space character (0x08).  We have fixed it (Ver: Beta 2.1) and updated our download files.  If you have downloaded AV Terminal Cmdr II in the past, just download the executable file and save it in the file folder where the old one exists.  We are sorry for any problems it might have caused you.

All downloads are zip files except the updated executable file.