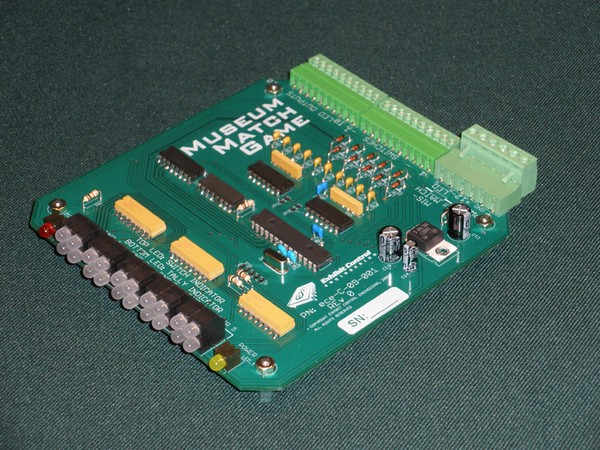 We developed a stand-alone electronic package to be used in an interactive kiosk where the visitor is asked to match up artifacts, images, text or some combination thereof and receive a payoff when they matched all the items correctly.  This was for a bid proposal, but since we had done this numerous times with larger gallery control systems, we felt like this would be a good product for museums who want an economical entry into the interactive exhibit arena.  The Museum Match Game has ten inputs and eleven outputs.  All inputs are diode protected and processed through a hardware de-bounce circuit into a Schmitt trigger to the controller.  The original game had ten buttons that visitors use to match five pictures of fossils with five pictures of the animals species that they came from.  A correct match would light up both buttons.  The user then had a set period of time to match up the next pair, until all of the matches were made.  Then the buttons would do a dance sequence to indicate the payoff.  The eleventh output was for a mismatch indicator.  Other variants have the eleventh output trigger a relay for a light box to light up as the payoff.  Another neat concept is for the eleventh output to trigger a digital message repeater (DMR) for an audible payoff.  We have also combined two boards for a total of ten pairs, where the object was just to match one pair at a time indicated by both buttons illuminating.  This raw circuit card has LEDs for all inputs and outputs to aid in installation and testing.  Contact us with your idea to see if this item is easily adapted to your requirements.  All you need is an exhibit with five pairs of things to be matched.  Systems can start as low as $400, if you use a pre-developed game firmware.