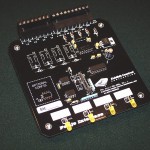 The Panjo Interface Board was designed to provide an interface between an AMX NetLinx controller’s IOs and many common sensors with TTL or contact closure outputs. The NetLinx controller’s IOs cannot detect pulse widths less than 66 msec in duration or distinguish between pulses occurring faster than about 10Hz. The Panjo Interface can be configured either as a pulse stretcher or a count divider. If the sensor outputs are shorter than the minimum time width but occur slower than 10Hz, the Panjo Interface can be designed to stretch the pulse to something detectable by NetLinx. If the pulses occur at higher rates, then it can be configured to divide the count and output a pulse that can be detected by NetLinx. Depending on the timing relationship of inputs, the Panjo Interface could provide this functionality for up to four NetLinx IOs. Most of the time custom programming is included in the price. Your requirements may dictate additional costs. 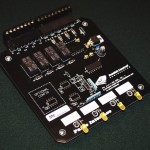 The Panjo Interface also has one other configuration that is most applicable to the NI700 and the NI900. These devices do not have any relay ports. In many cases, they are all that are needed for small systems, but when relays requirements occur, one must upgrade to a NI2100 or add an Axlink AXB-Relay8 box. The Panjo Interface Board can be configured to provide up to four relays for four unused IOs on a NetLinx Controller. Since it doesn’t need a programmable device as the pulse stretching or count dividing version does, it is much more economical. Panjo Interface relays are similar in functionality as the integrated relays on NXC-REL10 Cards. Click on the image above to see a closer view of the relay version of the Panjo Interface. 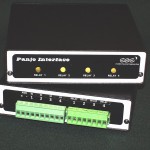 Currently, the Panjo Interface is provided as a circuit card that can be mounted on standoffs. Or, it can be enclosed in an optional industrial metal case which can be rack mounted. Those of you familiar with the AMX-AXB style boxes (Lansing Enclosures) will recognize this packaging. This case will increase the cost of any version of the Panjo Interface. Click on this image to see a closer view of a Panjo Interface in a Lansing metal enclosure (AXB style) that was configured for a four-IO to relay functionality.