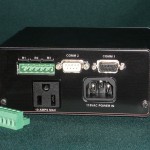 The Exhibit Power Commando is a device that can control 10 amps of 120vac power to the exhibit.  The Power Commando can be controlled by any system that can communicate via Ethernet and TCPIP.  Possible head end control systems could be a personal computer (Windows or Apple), AMX NetLinx, Crestron and Medialon to name a few.  Currently, ECE only offers the AMX control, but will share the control protocol with those who want to develop their own control and who accept a non-disclosure agreement. 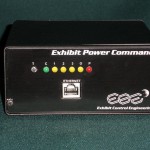 There are two versions of the Commando: wired and wireless.  The wired version connects to the network via Cat5 cable.  The wireless uses the IEEE 802.11g standard.  A very simple string is sent by the control system to activate and release the switched power outlet.  A simple string can also be used to solicit feedback of the outlet’s status.  In addition, there is a front panel button which will toggle the switched power outlet on and off.  The wireless version can negotiate WAP TKIP Password for secure wireless operations.

In addition to controlling power, the Exhibit Commando has a serial port for two-way communications a serially controlled device.  Think of this capability as an Ethernet-to-serial adapter. Communications back and forth are almost pure pass-through.

Finally, the Commando has three optional relays that can each provide electronic switching for loads of 2 amps up to 30vdc or provide contact closure signals to devices requiring such. Controlling each of these relays is once again a very simple string protocol both for activation/deactivation and for soliciting status feedback.

The Commando has some LED diagnostic indicators to assist in installation and trouble shooting.  The first is a red LED which indicates the unit has power.  There is a green LED which indicates when the Commando has linked communications with the head end system. Finally there are four yellow LEDs that indicated the status of the three optional relays (if present) and the status of the switched outlet (ON or OFF).

The Exhibit Commander by using PC Commando and wake-on-LAN technology, can now provide PC only exhibits the same power up and down functionality without using Exhibit Power Commandos.  Have a need to go wireless?  By attaching economical wireless access points (WAPs) to PCs we have been able to implement wake-on-LAN without the short coming of true Wireless-WOL.  And, there are some other functions that can be thrown into the mix using PC Commando.  Contact us for additional information.

Combining Exhibit Power Commandos and PC Commandos with a scheduling function, diagnostic functions and a user interface then completes the package for an Exhibit Commander system. Currently, ECE has developed a master NetLinx program and modules for both the Exhibit and the PC Commandos.  Please contact us for more information.