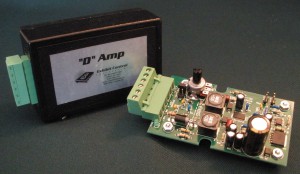 We were asked to develop a mono-channel audio amplifier that could provided 15 watts of power to a speaker with a target price of half of what it cost for a two channel amp.  We decided to try and make it a class “D” amplifier with no heat sink.  This was the result of our effort.  The idea was it could be used within a speaker enclosure as a powered amp or used in a kiosk that only had one channel of of audio.

In single quantities, it doesn’t quite make the half price criteria, but we are very pleased at how well it sounds.  We also did our :due diligence” in trying to make it comply with FCC EMI standards.  We’ll never foot the bill to obtain such a certification, but we followed TI’s guidelines and think it stands a pretty good chance of passing.  Click on the picture for a larger view of it in both its enclosed version and circuit card version.  Or click on this link for the manual:  “D” Amp Manual