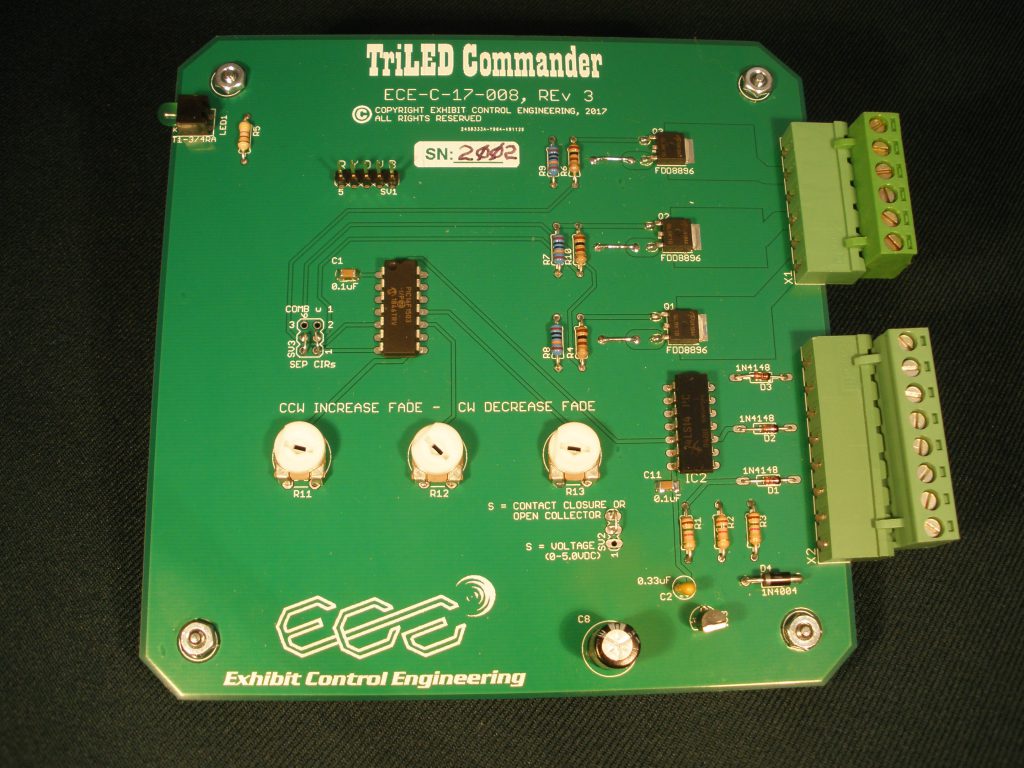 There seemed to be a trend for museum exhibit designers to want to incorporate economical LED strip lighting into their exhibits.  The problem that we saw, is most of the controllers for those LED strips can only snap “on” and snap “off” the LEDs and are controlled through a hand held IR device.  This is generally not conducive to live externally activated exhibits.  Generally, most designers would like a more graceful dimming or fading process and a way to automate the action.  So we developed the TriLED Ramp Commander.  It can be manufactured to operate in one of two ways.  First, if you just want to operate a single color, LED strip (two wire), it can be built so that you can ramp up or down three different LED strips independently with either contact closure or TTL inputs.  You can individually adjust these up/down fade times for each of the three circuits.  The other configuration is for RGB strips or single color chase LED strips.  These LED strips have three circuits (four wires) and the TriLED Ramp Commander will ramp all three circuits together using only one contact closure or TTL input.  In the case of RGB strips, that means the color of the ramp up/down remains the same through the entire process.  In the case of single color LED chase strips, this means the the chase sequence is gracefully ramped up and down.  This approach still requires you to use the included LED manufacturer’s controller, but adds the fade feature to its operation.  However, if you are interested in more capability in controlling single color chase LED strips, we suggest you take a look at our Chase LED Commander.

Since the inception of all our LED control, we have been striving for the “perfect” LED fade curve: one that emulates that of an incandescent filament type light bulb.  This wasn’t really necessary for exhibits where the designer was trying to avoid a snap on/off fade, but we continued to experiment to find a dimming curve that would be truly dramatic.  Recently we developed a REv 5 version that has achieved our dimming curve goal.  Over a ten-second fade time, the eye perceives a smooth graduation of the light intensity over the entire fade process both at the lowest and highest portions of the fade curve.  We also added LED indicators for each channel that mimic the dimming process of their associated output.

We can provide the TriLED Ramp Commander in a sharp looking extruded aluminum case or as a bare circuit card mounted on stand offs.  We have not developed a case for REv 5 yet, but contact us if that is a requirement.