Control of most museum exhibit PCs is either to leave them on all the time or perform a non-graceful shutdown by removing power.  To get them to boot back up, they set the Bios to boot up on application of AC power.  ECE has developed a little app that runs in the background of the Windows PC to be controlled and communicates with the NetLinx Master via TCPIP.  It can gracefully powered down the PC over Ethernet using TCPIP communications.  By using Wake-On-Lan technology, we can WOL the PC by the same Ethernet connection.  Even though this applet was developed during the Win98 era, we have used it extensively on Win7 and it has been operated on both Win8 and Win10.  The applet will only work on the PC it was purchased for and should be considered a throw away piece of software; it gets tossed with the PC at its end of life.  In other words, the applet cannot be moved over to a replacement computer.  The replacement PC needs to have a new applet purchased for it.  This applet can also be used to put up a black screen or a warning screen on the PC as might be required during a fire alarm and to do a soft reboot.  With the purchase of the applet, ECE will also provide sample NetLinx code and a module for the Master to communicate with the applet. 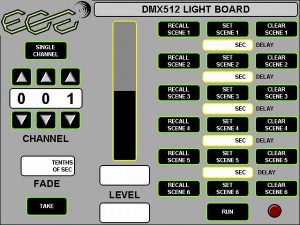 Our work in the museum arena has required us to control complex light shows via DMX512. Usually, it required our client to rent a light board and operator to develop the DMX commands and sequencing. Then the program was either converted to a light show controller or the data given to us to hard code into the NetLinx system. This led us to develop the DMX512 Light Board module for NetLinx which eliminated the need for the light board and operator for those systems that would eventually be controlled by NetLinx.

This module provides light board type control over any of the 512 DMX channels of an AXB-DMX512. You can control single or multiple channels, set fade times and control the target channels either via a “Take” button or in real time with a slider control. You can also sequence up to six DMX events with variable delays between them to simulate a portion of a light show. All data needed for putting into the NetLinx program can be observed and recorded. Don’t have a touch screen? No problem. The touch screen is served off the NetLinx controller’s WEB page. Comes with the touch screen file, an include file for the Master program and the .tko file for compiling into your NetLinx code. Click on the image for a closer view of the touch panel screen. Download the Manual below for more information. 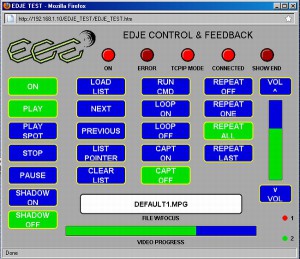 We have just finished development for a NetLinx module to control most current versions of the Adtec Edje mpeg player. We have not finished the manual for it, but are previewing it here now as an advanced notice. Click on the image to the right for a closer look at the touch panel screen as it appears in a WEB browser while the unit is playing. The module accesses most of the features of the Edje that one would need for using the mpeg player in an automated museum exhibit. They include:

The module allows control via either serial (RS232) or Ethernet and can control either a single Edje or multiple Edjes playing in a synchronized show. It provides several options for determining when the file is finished playing (the most accurate requires serial control). Other true feedback includes: volume, video progress, the file name that is playing and whether the unit has experienced an error. The module comes with the .TKO file, a sample master program, a G3 touch panel file (which can be used on the NetLinx’s master via a WEB browser if a physical touch panel is not available) and sample play list and shadow files. It is a truly bullet proof method for controlling an Edje in the demanding museum environment.

This module was developed to control one of the most versatile media display systems on the market today: Dataton’s Watchout. Click on the image to the right to see a closer look at the screens provided in the demonstration touch panel that comes with each copy of the program. The module provides control over almost every capability of Watchout. These include: 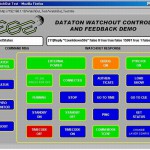 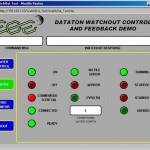 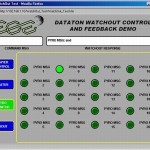 The module provides for control either via RS232 or TCPIP. It comes with the module .tko file, a G3 touch panel which can be served off the NetLinx master, a sample Watchout Show (a countdown for 60 seconds) and a sample CMD.txt file for RS232 communications. Click on the link below to view the manual for using the module.